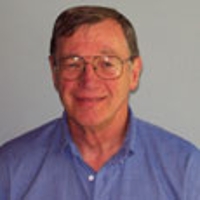 Charles G. Wade graduated from SIUC with a B.A. in Chemistry in 1960. After receiving his Ph.D. in 1965 from MIT, he did postdoctoral work at the University of Chicago for three years. Since 1967 he spent the next 13 years on the chemistry faculty of the University of Texas, Austin where his research included NMR dynamics of liquid crystals, diffusion in biological membranes, and optical studies of carcinogenesis in cells. In 1976-1977 he spent a sabbatical year at UC Berkeley with Mel Klein and Melvin Calvin. During his academic career, Charles Wade obtained grants of approximately one million dollars from NIH, NSF, American Cancer Society, and private foundations. His industrial career consists of a 22-year stint at IBM (1980- current), where he continued his research in NMR and held various managerial positions including the current position as the Manager of Materials Analysis and Characterization of the IBM Almaden Research Center. His activities have resulted in 75 research publications and two books. Charles Wade also maintains an active involvement in education. He is the IBM co-director (with Stanford and UC Davis) of an NSF Materials Research Science and Engineering Center (Center for Polymer Interfaces and Macromolecular Assemblies-CPIMA) which brings not only postdoctorals but also summer undergraduates and high school teachers for research experiences at IBM Almaden. He is also the co-director of another academic industrial partnership, an NSF GOALI grant with San Jose State University (Surface and Analytical Chemistry of Materials). Charles Wade also serves on various committees such as on the Materials Technology Center Board at SIUC and on NSF panels for grants and various programs.