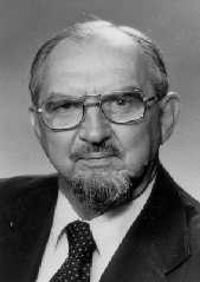 Curtis W. Smith was born in Omaha, Illinois, January 14, 1918. He earned his B.Ed. degree from Southern Illinois Normal University in 1940 where he worked his way through school by doing odd jobs around campus. After SINU he went on to the University of Illinois in Urbana-Champaign to earn his Ph.D. in organic chemistry in 1943. Immediately after receiving his Ph.D., Dr. Smith started work with Shell Development Company in their Industrial Chemicals Division. In 1952 he was promoted to a member of staff management and in 1965 he became the Manager of Research and Development of the Industrial Chemicals Division. In 1971 he became the Assistant to the President of Shell Chemical Company, and in 1977 Dr. Smith became a Senior Consultant involved in Chemical Industrial Regulations for Shell. Finally, he retired in 1983, but continued to be involved with Shell when asked to review their worldwide patent policy. During his 40 years at Shell, he synthesized the first fused thiazolidine-beta-lactam, which helped elucidate the structure of pennicilin; developed a synthesis of tryptophan using quarternary ammonium alkylation; developed the synthesis of straight chain alpha-olefins and the biodegradable alcohols derived from them, which led to the development of biodegradable detergents worldwide; and developed new chemistry and new uses for acrolein. Dr Smith holds 75 patents in the US and other countries and has published 20 research papers and one book. In 1966 he was awarded the Alumni Achievement Award by Southern Illinois University. Dr Smith is a member of Sigma Xi and the American Chemical Society.