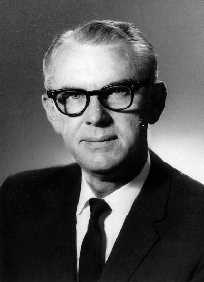 Fred Banes was born in Saline County, Illinois to tenant farmers who moved to Christopher where Fred graduated from High School during the depression in 1934. After working in the Civilian Conservation Corps in Illinois and Wisconsin during 1935 and 1936 he entered Southern Illinois Normal University and he graduated Cum Laude with a B.S. in Chemistry in 1940. He earned his Ph.D. in Chemistry from the University of Illinois in 1943, and later in his career (1958) engaged in Post Doctoral studies at the Massachusetts Institute of Technology Sloan School of Business Management. Dr. Banes joined the Esso (now Exxon) Research and Engineering Co. (ER&E) in 1943 where he held the titles Research Chemist, Section Head, Assistant Director, and in 1957 was appointed Associate Director of the Chemical Division. During that period he conducted research projects related to plastics, elastomers, industrial chemicals, additives, fibers, and new organic chemicals. In 1960, Dr. Banes moved to Enjay Chemical Company as part of the corporate planning staff. He was involved in development and long range planning programs for Enjay and coordination of research activities carried out by ER&E. Dr. Banes’ extensive service included chairman of the Board of Higher Education for the American Baptist Convention, Vice President and Board member of the Westfield YMCA, Chairman of the YMCA World Services Committee, Board of Directors of the Chemists' Club of New York, Economic Development Council NYC, Director of Planning for NYC Inner-City High Schools, and Vice Chancellor of the NYC Board of Education. He was inducted into Phi Beta Kappa, Kappa Phi Kappa, Delta Rho, Chemeka, Chi Delta Chi, and Alpha Chi Sigma. He had seventy-five patents and was a member of the American Chemical Society, the New York Academy of Science, the Society of Chemical Industry, and the National Society for Corporate Planning. In 1968 he was awarded the Distinguished Alumni Award by Southern Illinois University.