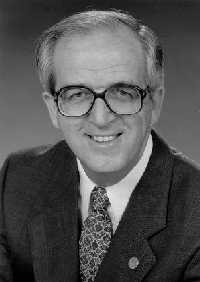 Willard Harrison was born in McLeansboro, Illinois. He received his B.A. and M.S. degrees in Chemistry from Southern Illinois University in 1958 and 1960 and his Ph.D. from the University of Illinois at Champaign-Urbana in 1964, where he held several Fellowships. Dr. Harrison joined the faculty of the University of Virginia as Assistant Professor in 1964, was promoted to Associate Professor in 1969, to Full Professor in 1974, and served as Chemistry Department Chairman, 1978-1981 as well as Associate Provost for Academic Support, 1982-1986. In 1988 he joined the faculty of the University of Florida as Professor of Chemistry and Dean of the College of Liberal Arts & Sciences. He was a Visiting Scientist at the Max-Planck-Institute for Plasmaphysics in Munich, 1975-1976; a Fulbright-Hayes Senior Research Scholar, at the University of Paris, Department of Solid State Physics, 1981; a Visiting Scholar at Stanford University Department of Chemistry, 1982, Department of Geology, 1987-1988; and is a Guest Professor of the SEDC Laboratory of Analytical for Material and Life Process at the Xiamen University in Xiamen China, 1997-2002. He received the Service Recognition Award from the FBI National Academy, 1970-1980, the Distinguished Service Award from the Virginia Section of the American Chemical Society, 1981, the Lester W. Strock Award from the Society for Applied Spectroscopy, 1993, and the Alumni Achievement Award from Southern Illinois University, 1995. Professor Harrison is a member of the Honor Society of Phi Kappa Phi, has published 109 research papers, delivered 92 lectures, and presented 138 contributed papers. Most of his research has been in the area of Mass Spectrometry.