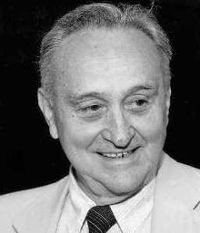 Fred Basolo was born in Coello, Illinois. He earned his B.Ed. degree from Southern Illinois Normal University in 1940 and then his M.S and Ph.D. degrees from the University of Illinois in 1942 and 1943. After a three year foray into industry at Rohm & Hass Chemical Co., he became an Instructor in the Department of Chemistry at Northwestern University and rapidly rose through the ranks to Full Professor. He served that department as Chairman from 1969-1972. In 1980 he was awarded the title, Morrison Professor of Chemistry. Among Professor Basolo's many honors are the American Chemical Society's Awards for Research in Inorganic Chemistry and for Distinguished Service in Inorganic Chemistry; The Bailar Medal Award; The Dwyer Medal Award; Election to the National Academy of Science; The James Flack Norris Award for Outstanding Achievement in the Teaching of Chemistry; President of the American Chemical Society; Member of the Board of Directors of the American Chemical Society; Honorary D.Sc. Degree from Southern Illinois Univerisity; Laurea Honoris Causa from the University of Turin; the Italian Chemical Society Award for Research in Inorganic Chemistry; the IX Century Medal of Bologna University; the Harry and Carol Mosher Award; the Padova University Medal; Medals from Pohang University of Science and Technology (POSTECH), the Korean Institute of Science and Technology (KIST), and the Inorganic Division of the South Korean Chemical Society; the Chinese Chemical Society Medal, the American Chemical Society's George C. Pimentel Award in Chemical Education; the American Institute of Chemists' Chemical Pioneer Award and Gold Medal Award; the Humboldt Senior U.S. Scientist Award, and the 1996 Josiah Willard Gibbs Medal. Professor Basolo has served on many editorial boards, has held many offices, and has served on many committees. He has been honored with 19 name lectureships, presented numerous plenary lectures, and has authored more then 375 scientific publications and co-authored several books.