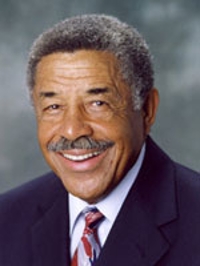 A native of Centralia, Illinois, William R. Norwood received his bachelor's degree from Southern Illinois University in 1959 and an MBA degree in International Relations from the University of Chicago. While at SIU he was a three-year starter as SIU's first African American quarterback and has been inducted into the Saluki Hall of Fame. Norwood was also a member of the ROTC while at SIU and has been inducted into the SIUC ROTC Hall of Fame. After graduation he served as a pilot in Strategic Air Command from 1959 to 1965. He then began a 31-year career with United Airlines, the first African-American pilot hired by United, and the first to achieve the rank of captain. When he retired from United Airlines in 1996 his name was painted on the side of a United Airlines aircraft (a B-727) which is part of the "Take Flight" exhibit in Chicago's Museum of Science and Industry. He is also included in "Black Wings", a permanent exhibit at the Smithsonian Institution National Air and Space Museum. In 2007 Norwood was inducted into the Illinois Aviation Hall of Fame. He is the recipient of numerous awards for his contributions to his profession, to education, and to the community. Norwood was a member of the SIU Board of Trustees from 1974-2001 including a period as chair of that Board. He is a recipient of the University's Distinguished Alumni Award and the College of Science Alumni Achievement Award. He and his wife, Molly, are life members of the SIU Alumni Association and of the NAACP and have established scholarships for SIUC students. In 2008 he was inducted into the Lincoln Academy of Illinois.